A key opinion leader (or KOL) and an influencer vary in many ways. While their overall goals are similar—to present consumers with potential purchase options—their methods and the credibility behind their influence vary.

Nearly 50% of consumers follow influencers specifically for their recommendations. With an estimated 4.6 billion social media users, influencers arguably use their platform for personal gain. Brands leverage influencers, often reaching out to social media influencers, in particular, to promote their product or service.

In fact, according to Influencer Marketing Hub, over the last decade, we have seen social media snowball in importance. They say that more than 3.4 billion people actively use social media. This number makes up 45% of the world’s population.

With billions of consumers on social media, it makes sense that companies would reach out to well-known names whose target audience represents that of the particular company. But with billions of dollars invested in consumers’ purchasing decisions, it’s crucial to ask who exactly is influencing consumers.

What Is A Key Opinion Leader?

A KOL is an expert in their particular area of study and maintains a well-respected social status in their industry. Doctors, politicians, advisors, consultants, etc., are all experts with the potential of being key thought leaders in their field.

Because of this, KOL marketing can be considered a more credible way to bring brand awareness. Furthermore, thought leaders are arguably experts in their fields who do this type of marketing, bringing credible influence to consumers.

While KOLs are a type of influencer marketing, they are more than just an influencer. They have the credibility to back up their following and help spread the word to their audiences on a particular brand or product.

Key opinion leaders are experts in one or more fields and have the education (formal or informal) to back up their credibility. While opinion leaders often have formal education (such as a doctorate), in today’s world, knowledge gained through informal means such as digital certifications and life experience can also lend credibility to a potential KOL. An opinion leader’s story, background, and experiences all contribute to whether or not people see them as experts in their field.

The number of followers Opinion leaders (or OLs) have can be broken down into:

However, regardless of the number of followers an OL has, they can be broken down into two types:

OL focuses on one topic

OL focuses on a variety of topics

A monomorphic opinion leader is arguably more credible in his specific field. For instance, someone with a doctorate in psychology would likely be viewed as more credible than someone with claims expertise in physics and life coaching, as well as earning their doctorate.

What Is An Influencer?

An influencer has the power to affect consumers’ purchasing choices due to credibility gained through their following. They build this credibility through:

Individuals typically view influencers with a substantial following as more credible than influencers with less following. For influencers, with significant numbers comes big influence. However, as discussed later, this does not apply to key opinion leaders.

Simply put, influencers create awareness around a brand, product, or opportunity. Influencers are often social media content creators with a natural ability to use their platform to create and spread word-of-mouth marketing.

When you think of influencers, individuals with big followings on Instagram, TikTok, or famous YouTubers may come to mind. For instance, vlogger Casey Neistat has 12.4 million subscribers to date (and is so well known Nike asked him to make a movie about their hashtag, #MakeItCount).

What sets these individuals apart? We could argue personality, the algorithm, plain likeability, or starting already well-known due to who they know. However, nuance aside, we can break influencers into two sub-groups.

We can group key opinion leaders and influencers into the categories mega, macro, micro, and nano influencers. However, this type of influencer can also be grouped based on niche, such as: Both the KOLs’ and the influencer’s execution of their platform (creating awareness) may sound similar, but the specifics of how and why vary. What Are The Differences Between Key Opinion Leaders and Influencers?

On the other hand, key opinion leaders are not viewed as influencers simply based on their social media following. Instead, KOLs are influential based on their professions. Whether they are a doctor, politician, well-known journalist, life coach, or have another area of expertise, their knowledge is the main contributing factor to their influence.

This knowledge is a conduit that shapes what they promote, when they promote it, and why. A KOL will not say yes to any collaboration offer, and those affiliates must be in line with what the KOL represents. Finding KOLs often comes down to job type, and influencers may be perusing social media pages, searching out hashtags, and browsing the Internet.

So, let’s take a look at the three common denominators we believe separate key opinion leaders from influencers:

Authenticity is the critical factor separating opinion leaders from influencers. While influencers are often offered brand deals, given free products, and offered promo codes for sharing products on social media platforms, regardless of how the products align with the influencer’s brand, KOLs only accept collaborations with brands they genuinely want to stand behind.

Multiple brands may reach KOLs in hopes of collaboration, but KOLs only accept affiliations that align with their previously established brand, beliefs, or areas of expertise. This authenticity further establishes their credibility with their audience.

Key Opinion leaders usually have significant roles within organizations or run the organization itself. Meanwhile, influencers are usually on their own, working with brands for social media purposes. In addition, KOLs usually have more expertise due to years of previous study in their field. Because of this, they are considered masters of their trades.

According to Forbes, the key issue for KOLs is becoming more visible so they can monetize their expertise. However, the opposite is often true for influencers: They have the visibility but must build their credibility.

Usually, the KOL has a primary job that parallels their opinion leader influence. They may have a career as a life coach, professional speaker, doctor, etc. For example, children’s doctor, Mariana Temple, has a large following, but her primary job is a holistic pediatrician. Yes, she is an influencer, but her career as a holistic pediatrician is how she made it here. Meanwhile, the influencer’s job usually focuses on influencing itself (often via social media). Their central focus is building and then leveraging their platform to gain influence. A KOLs focus usually centers on the idea: Since I have a platform, how can I use it to impact?

Key Opinion Leader or Influencer: Which is Best for You?

If you are a thought leader or expert in a particular field and people come to you for advice, becoming a KOL is likely your next best step. You have the credibility to back up your advice, you’ve done the training, and you’re already respected. Now it’s time to heighten your visibility to monetize your expertise.

But what if you’re a pro at social media, and you have a following, but you don’t have a particular area of expertise? Become an influencer. After measuring the success of using influencers to spread brand awareness, companies have found their ROI extremely high.

You may fit into one of the following influencer categories:

If you’re unsure how to become a key opinion leader or influencer, ask yourself these questions:

What do I know about?

What topics do I gravitate to?

What do people ask my advice on?

Do I feel comfortable online?

Do others want my opinion?

As you answer these questions, write down your answers. Then, compare your answers to the differences listed above, and determine if you naturally fall into the category of KOL or influencer.

Remember, both types of influencers carry the responsibility of sharing their knowledge or experiences authentically with hundreds if not thousands or millions of individuals. Use your platform with intention, and you’ll be surprised at the ROI you receive. 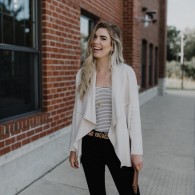